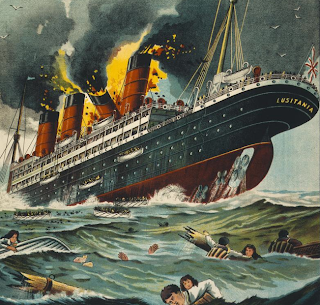 On May 7, 1915, the British ocean liner RMS Lusitania, rival of the Titanic, was torpedoed by a German U-boat and sunk. Of the 1,959 people on board, 1,198 died, including 128 Americans. The sinking of the Lusitania enraged Americans (even though they had been warned) and hastened the United States' entrance into World War I.

1) Would you know how to escape a sinking ship? List 5 steps you could take to ensure your survival.

2) What did the passengers of the Lusitania do wrong?

3) Titanic vs Lusitania: Who survived and why?

4) Was anyone on board both Titanic and Lusitania when they sank?