Letters From the Trenches

During World War I, on and around Christmas Day 1914, the sounds of rifles firing and shells exploding faded in a number of places along the Western Front in favor of holiday celebrations in the trenches and gestures of goodwill between enemies.

Starting on Christmas Eve, many German and British troops sang Christmas carols to each other across the lines, and at certain points the Allied soldiers even heard brass bands joining the Germans in their joyous singing.

At the first light of dawn on Christmas Day, some German soldiers emerged from their trenches and approached the Allied lines across no-man's-land, calling out "Merry Christmas" in their enemies' native tongues. At first, the Allied soldiers feared it was a trick, but seeing the Germans unarmed they climbed out of their trenches and shook hands with the enemy soldiers. The men exchanged presents of cigarettes and plum puddings and sang carols and songs. There was even a documented case of soldiers from opposing sides playing a good-natured game of soccer.

Hollywood vs. History: Compare this music video to the letters of soldiers who were actually there.

In class we have discussed the devastating effect of new WWI weapons including machine guns, flame throwers and gas. According to the letter what weapon might have ended the war? Why do you suppose this truce didn't last?


Write a letter of your own from the trenches describing the conditions and your experiences.

Use the 'Letter Generator' to help get started.

Why is letter writing a lost art?

Don't have a Pen Pal?  Want famous authors to send you letters every month?
Posted by Mr. Kelly at 2:00 PM No comments: 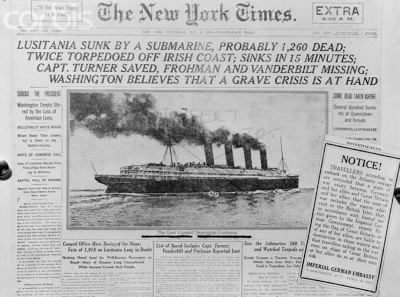 The front page of The New York Times after the sinking of the ocean liner Lusitania by a German submarine, along with a notice printed within from the German Embassy in the USA warning against trans-Atlantic travel.

Why did the Germans target a defenseless passenger ship like the Lusitania?


How was the Lusitania different than the battleship Maine?

How did the attack pull America closer to war?