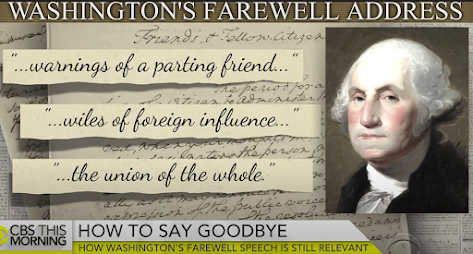 In 1796, Mr. Washington's "warnings of a parting friend" cautioned Americans about the "wiles of foreign influence." Daily Beast editor-in-chief John Avlon, who explores the history and legacy of the address in his new book, joins "CBS This Morning" to discuss "Washington's Farewell: The Founding Father's Warning to Future Generations."
While Washington focused mainly on domestic issues in the address, he ended with a discussion of foreign affairs. “It is our true policy,” he declared, “to steer clear of permanent alliances with any portion of the foreign world,” a statement that would shape American foreign policy for more than a century to come.

In his Farewell Address, Washington took neutrality a step further. “The great rule of conduct for us in regard to foreign nations is,” he advised, “. . . to have with them as little political connection as possible.” This advice was translated by the presidents who followed Washington into a policy of unilateralism. Under this policy, the United States “went it alone” in its relations with other countries, and did not seek either military or political alliances with foreign powers.

Was Washington more of a 'Realist' or 'Idealist?'
How did Washington's foreign policy influence the War of 1812 and the Monroe Doctrine?
Posted by Mr. Kelly at 4:49 AM