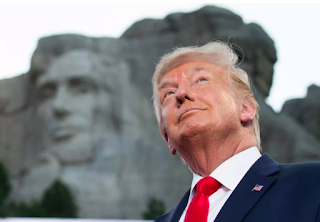 Can you name all the Presidents on Mt. Rushmore? Why were they chosen?


Should President Trump be added to this famous sculpture? Will his legacy be as great? Compare him to the each of the famous Presidents shown.Who is he most like? The least? Why?


"We believe a nation's memorial should, like Washington, Jefferson, Lincoln, and Roosevelt, have a serenity, a nobility, a power that reflects the gods who inspired them and the gods that they have become"
- Gutzon Borglum, on his reason for building Mt. Rushmore.

Is Mt. Rushmore truly a 'Shrine to Democracy'  or a symbol of White Supremacy?  You Decide.

Why doesn't the National Park Service give the whole story?

What would the presidents have said about being 'monumentalized' in such a way?
Posted by Mr. Kelly at 5:24 AM No comments:

The End Justifies the Means

Machiavelli's name is a byword for immorality and political scheming. But that's deeply unfair. This was simply a political theorist interested in the survival and flourishing of the state.  Can you be a 'good person' and a good 'politician?'  What would Richard Nixon say?
Posted by Mr. Kelly at 8:15 AM No comments:

On September 23, 1952, California senator Richard Nixon reserved a spot on television to deliver the most important speech of his career. With this address, Nixon hoped to squash rumors that he had accepted $18,000 in illegal political contributions to finance personal expenses. The Republicans had recently nominated Nixon to run for vice president on Dwight D. Eisenhower’s ticket. When these charges against Nixon became public, Eisenhower was noncommittal— he did not drop Nixon from the ticket, but he also did not defend him.

In his speech, Nixon said, “Not one cent of the $18,000 or any other money of that type ever went to me for my personal use. Every penny of it was used to pay for political expenses that I did not think should be charged to the taxpayers of the United States.” But, he did confess to accepting one personal gift:


A man down in Texas heard [my wife] Pat on the radio mention the fact that our two youngsters would like to have a dog. And, believe it or not, the day before we left on this campaign trip, we got a message from Union Station in Baltimore saying they had a package for us. We went down to get it. You know what it was. It was a little cocker spaniel dog in a crate he’d sent all the way from Texas. Black and white spotted. And our little girl—Tricia, the 6-year-old—named it Checkers. And you know, the kids, like all kids, love the dog, and I just want to say this right now, that regardless of what they say about it, we’re gonna keep it.