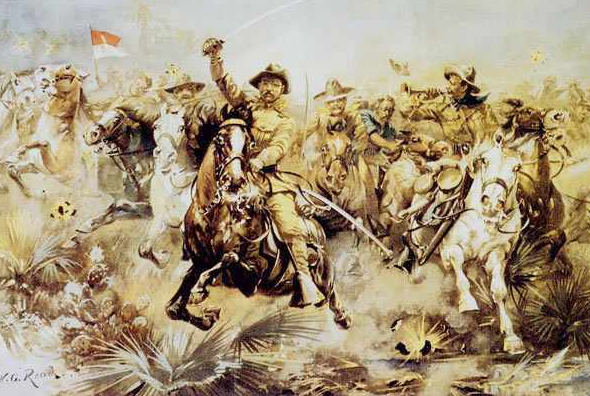 Taking the Heights at San Juan Hill
The charge up an obscure Cuban hill on July, 1 1898 was a pivotal point in Theodore Roosevelt's political career. When war broke with Spain in April of that year, Roosevelt was serving as Assistant Secretary of the Navy. He immediately quit his position and helped form a regiment of volunteers. The "Rough Riders" enlisted cowboys and college men led by Roosevelt under the command of Leonard Wood. They arrived in Cuba in time to take part in the Battle of San Juan Hill.

Read the actual account of the battle of San Juan Hill and compare it to the video.

1) Was the film historically accurate?

3) What information was intentionally left out?  Why?

4) How would the story be different if the Spanish were telling it?

5) Who were the real heroes of San Juan Hill?  Why aren't they included in the accounts?


6) Should Teddy Roosevelt have received the Medal of Honor?  Why or why not?
Posted by Mr. Kelly at 4:56 AM