In John Steinbeck's The Grapes of Wrath, Tom Joad and his family are forced from their farm in the Depression-era Oklahoma Dust Bowl and set out for California along with thousands of others in search of jobs, land, and hope for a brighter future. Considered John Steinbeck's masterpiece, The Grapes of Wrath is a story of human unity and love as well as the need for cooperative rather than individualistic ideals during hard times.

Read this excerpt from the Grapes of Wrath & answer the questions.

Follow the lyrics as you listen to the song.  What would the Ghost of Tom Joad say about 2018?

In “Interstellar,” humanity is endangered by a blight that is gradually eliminating the number of crops that are viable on Earth. The world economy and national governments have shrunk dramatically. Drones race through Midwestern skies, abandoned by the intelligence programs that set them aloft, and crash into fields where they are scavenged by entrepreneurial farmers like Cooper (Matthew McConaughey), a former pilot who still dreams of flying. Violent dust storms, straight out of documentary footage of Dust Bowl storms, rise like mountains in the skies, and the particles fill children’s lungs, killing them. If it is not made explicit that the disaster is man-made, the use of testimony from actual Dust Bowl survivors  does.

“This really happened. It’s just a question of could it happen on a global scale, or in such a way that our existence on the planet would be imperiled?"

What do you think?

List 3 specific steps we can take to prevent future human/ environment disasters like the dust bowl.
Posted by Mr. Kelly at 5:20 AM No comments: 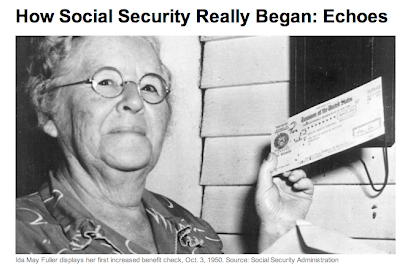 History is filled with examples of people who achieved fame not because of a major accomplishment, but simply because they were the first to do something. Such is the case of Ida May Fuller, a resident of rural Vermont who became the first beneficiary of a recurring Social Security payment on Jan. 31, 1940.

Is Social Security still a good idea today?
Posted by Mr. Kelly at 6:01 AM No comments: