Over the past two centuries, two schools of thought, known as realism and idealism, have shaped U.S. foreign policy. Realism is based on the belief that relations with other countries should be guided by national self-interest. From this perspective, foreign policy should pursue practical objectives that benefit the American people. Such objectives might include national security, increased trade with other nations, and access to overseas resources.

Idealism in foreign policy is based on the belief that values and ideals should influence how countries relate to one another. From this point of view, foreign policy should be used to promote America's founding ideals—particularly democracy, liberty, and rights—to ensure a better world not just for Americans, but for all people.

Was American foreign policy during the 1800s motivated more by realism or idealism? 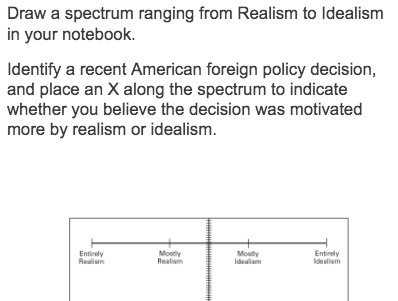 Where would Donald Trump's foreign policy go on the spectrum?  Barack Obama?  Why?

What conclusions can we draw?
Posted by Mr. Kelly at 11:25 AM No comments: