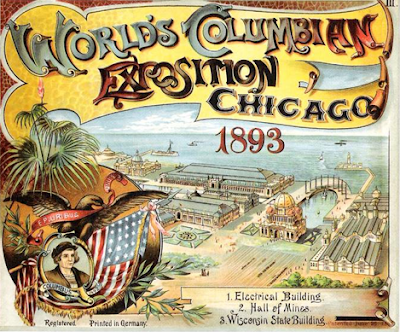 The World's Columbian Exposition of 1893 was an event of immense cultural importance to America and the World nearing the turn of the century. From May 1 to October 31, 1893, Chicago and the Exposition were host to 27 million visitors--nearly one quarter of the country's population at the time. Fairs encompassed the spectrum of experience and interest of the 1800s--from sport to entertainment to high culture. To understand their importance and draw in modern terms, they could be seen as a combination of the Olympics, DisneyWorld, the Superbowl, and the National Gallery--an international entertainment and cultural event with lasting social importance.

Particularly amazing was the fact that this futuristic view of what urban life could be grew out of the ashes of the Chicago fire just 22 years before.


Click here to begin your tour. How did the fair show America was the best? 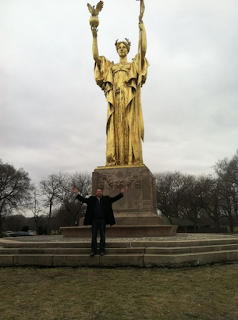 Like the 'Gilded Age' the Columbian Exposition suspended reality. It was a fantasy.  None of it was real. The buildings of the fair were designed to be temporary and unfortunately, most of them were destroyed. The exceptions being the replica Statue of the Republic (above) and the old Palace of Fine Arts. It's since been converted into the city of  Chicago's Museum of Science and Industry. The rest of the Columbian Exposition is long gone. So what happened to all the other buildings you ask?

Like most World’s Fairs, the storied “White City” of Chicago’s 1893 World’s Columbian Exposition was mostly destroyed after the end of the Fair, and little evidence remains today. I’ve often wondered what it would have been like to experience the fairgrounds in person. Thanks to the Urban Simulation Team at UCLA, and through the wonders of technology we can, however, still take a 'virtual' stroll through the grounds by clicking here.

What was the LEGACY of the Chicago World's Fair?
Who was the 'Devil In The White City?'

When was the last time you wrote or received a letter?  Send a postcard.  Here is how.

Listen to the band of John Phillip Sousa as you explore the fairgrounds.

New comments are not allowed.