The point is, ladies and gentleman, that greed, for lack of a better word, is good. Greed is right, greed works. Greed clarifies, cuts through, and captures the essence of the evolutionary spirit. Greed, in all of its forms; greed for life, for money, for love, knowledge has marked the upward surge of mankind. And greed, you mark my words, will not only save Teldar Paper, but that other malfunctioning corporation called the USA. Thank you very much.


Before there was Wolf of Wall Street there was Wall Street? What is Michael Douglas' character Gordan Gecko saying in this classic quote from the movie? Do you agree or disagree with his opinion?

What is the difference between a 'Robber Baron' and a 'Captain of Industry?'  Which is Warren Buffet?  Donald Trump?

Look at the chart: Legacy of the Bushiness Tycoons. Which of these views is most similar to that of Gordan Gecko? (click below to enlarge) 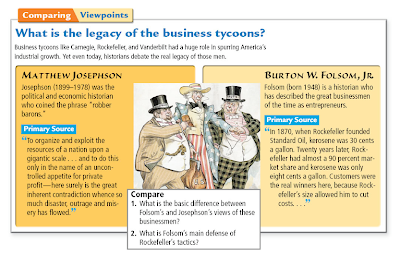 Of course lets not forget the demise of Augustus Gloop.
Posted by Mr. Kelly at 10:49 AM