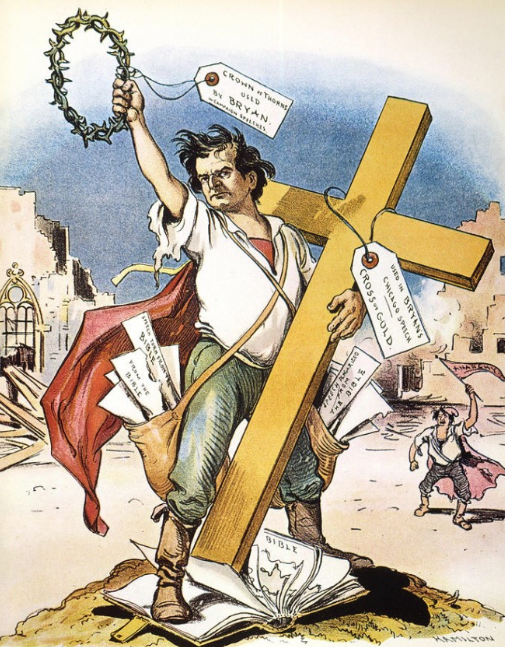 What should the caption of this cartoon be?

The most famous speech in American political history was delivered by William Jennings Bryan on July 9, 1896, at the Democratic National Convention in Chicago. The issue was whether to endorse the free coinage of silver at a ratio of silver to gold of 16 to 1. (This inflationary measure would have increased the amount of money in circulation and aided cash-poor and debt-burdened farmers.) After speeches on the subject by several U.S. Senators, Bryan rose to speak. The thirty-six-year-old former Congressman from Nebraska aspired to be the Democratic nominee for president, and he had been skillfully, but quietly, building support for himself among the delegates. His dramatic speaking style and rhetoric roused the crowd to a frenzy. The response, wrote one reporter, “came like one great burst of artillery.” Men and women screamed and waved their hats and canes. “Some,” wrote another reporter, “like demented things, divested themselves of their coats and flung them high in the air.” The next day the convention nominated Bryan for President on the fifth ballot. The full text of William Jenning Bryan’s famous “Cross of Gold” speech appears below. The audio portion is an excerpt. [Note on the recording: In 1896 recording technology was in its infancy, and recording a political convention would have been impossible. But in the early 20th century, the fame of Bryan’s “Cross of Gold” speech led him to repeat it numerous times on the Chautauqua lecture circuit where he was an enormously popular speaker. In 1923 (25 years after the original speech), he recorded portions of the speech for Gennett Records in Richmond, Indiana. Although the recording does not capture the power and drama of the original address, it does allow us to hear Bryan delivering this famous speech.]


W.J. BRYAN CARRIES ON THE SHOULDERS OF HIS ADMIRERS AFTER HIS ORATION.
from Harper's Weekly, 18 July, 1896.

Therefore, we care not upon what lines the battle is fought. If they say bimetallism is good, but that we cannot have it until other nations help us, we reply, that instead of having a gold standard because England has, we will restore bimetallism, and then let England have bimetallism because the United States has it. If they dare to come out in the open field and defend the gold standard as a good thing, we will fight them to the uttermost. Having behind us the producing masses of this nation and the world, supported by the commercial interests, the laboring interests and the toilers everywhere, we will answer their demand for a gold standard by saying to them:

You shall not press down upon the brow of labor this crown of thorns, you shall not crucify mankind upon a cross of gold!

William Jennings Bryant would lose to Ohioan William McKinley in one of the most dramatic presidential races in American History; and America would stay on the 'gold standard' more or less for the next 70 years.
Posted by Mr. Kelly at 4:54 AM