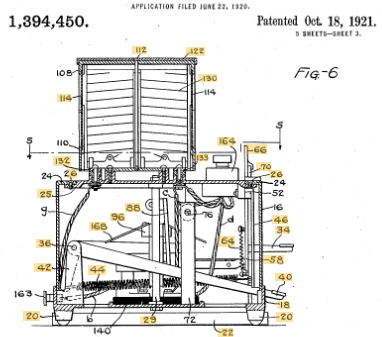 What is this contraption?


The U.S. Constitution states in Article 1, section 8, clause 8 that one purpose of the legislature is:

To promote the progress of science and useful arts, by securing for limited times to authors and inventors the exclusive right to their respective writings and discoveries


This is known as the "patent and copyright clause" and states the rationale for a patent system. The government is counting on commerce involving successful inventions, and the infectious inspiration which hopefully will encourage other inventors.

A great many inventions that receive patents never earn their inventors anything. We're not worried about that now. What we want to know is: what makes an invention patentable over those that aren't according to U.S. law?

In short your invention will qualify if it fits one of these five criteria:

2)Machine: something that can do something
example: a pop up toaster

3)Manufactured: something made by man
example: a Pop tart

5)New Use: doing something new with something that isn't new.
example: Pop tart as body fragrance?  Toaster as musical instrument?

Now take a look at these peculiar patents and you decide whether they 'cut the mustard.'

Have a great idea for an invention you think would make our lives here at school easier?

Think it could get patented?

Founded in 1973, The National Inventors Hall of Fame meets every year to honor a new group of inventors. To be considered for induction, an inventor must hold a US patent and the invention must have benefited society and advanced science and technology. Inventors in the Hall of Fame include Orville Wright and Wilbur Wright for the airplane, Rudolf Diesel for the internal combustion engine, and more recently Les Paul for the solid body electric guitar. Click here to see the complete list.

Who in our class would we induct?
Posted by Mr. Kelly at 4:35 AM