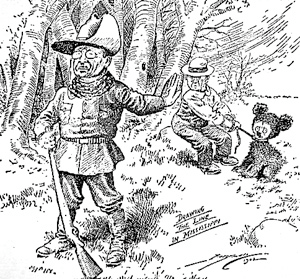 In 1902, on an unsuccessful hunting trip, President Theodore Roosevelt refused to shoot a bear that expedition trackers had caught and tied to a tree. The incident struck a chord with the American sense of fair play. Political cartoonist Clifford Berryman immortalized the incident in “Drawing the Line in Mississippi.” Tugging at American heartstrings, Berryman drew the old, injured female bear as a helpless cub. With Roosevelt’s permission, Morris Mictom, a Russian immigrant and Brooklyn toy-shop owner, sewed a cuddly stuffed toy and dubbed it Teddy’s Bear. With its big head and ears, and eyes as appealing as the future Mickey Mouse, the bear became a hit. German toy manufacturer Margarete Steiff created a stuffed bear, too, and began mass-producing copies in 1903. The stuffed bears became a hit with adults and children. Visitors who flocked to the boardwalks in New Jersey’s seaside resorts took home teddy bears as prizes and souvenirs. Women’s magazines featured ads for bear accessories and offered up-to-date patterns for sewing bear clothes. Books, songs, and even a 1907 feature film marked the rising popularity of teddy bears. This fascination has persisted ever since, making Teddy Bears the most popular plush toy in history.

What popular children's story does the silent film retell?

How is the ending different from the actual event?

What do you do if a bear attacks?


Still think it's weird for a grown man to play with a Teddy Bear?


Look at these other toys in the National Toy Hall of Fame. Where does the Teddy Bear Rank? What toy is your favorite?  What toys would you add to this list?