We have all suffered through this election.  But are we willing to give up our 'suffrage?'

The fight to gain suffrage was not an easy one.  Not for Ourselves Alone explores the movement for women's suffrage in the United States in the 19th century, focusing on leaders Elizabeth Cady Stanton and Susan B. Anthony. 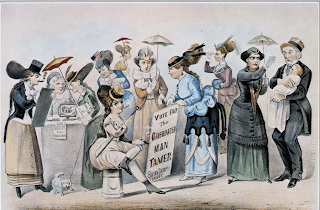 Was this cartoonist a man or a woman?  What should the caption be?

What obstacles did women have to overcome to earn their voting rights?

So YOU think YOU can VOTE?!