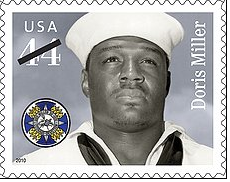 In 1941, Miller was a 22-year-old mess attendant on the USS West Virginia. At the time, black sailors were consigned to roles in the messman branch — work that entailed swabbing decks, cooking and shining officers' shoes.

He had awoken at 6 a.m. and was collecting laundry when the Japanese attack began and an alarm sounded on the ship, according to the Navy. Miller headed to the antiaircraft battery magazine, but it had already been destroyed by torpedo damage. He proceeded to the deck, where he was assigned to carry his wounded comrades, including the ship's captain. Miller was strong: a former high school football player in Waco, Texas, he was the ship's heavyweight boxing champion.

The young sailor then took over a .50-caliber anti-aircraft machine gun and fired it until the ammunition ran out. No matter that he'd never been trained on the weapon.

2) Who was Third Class Cook Dorris Miller?  Why was he given this stamp?

3) What opportunities did the war offer African Americans?   What Hardships did black soldiers still endure?

5) What even greater honor has Dorris Miller received?  Do you agree?