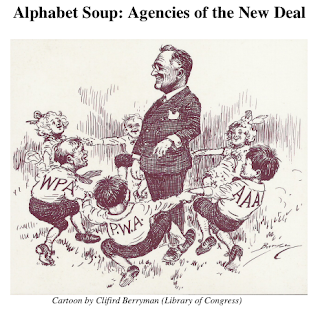 "The Only Thing We Have to Fear is Fear Itself"

Franklin D. Roosevelt's 1933 inauguration came at a somber moment in American History. The U.S. economy had hit rock bottom. Many Americans wondered if they would ever find work again. How did FDR try to reassure the American people?

When FDR pledged a 'New Deal' he had only a vague idea how he intended to combat the Depression.  The New Deal had countless programs, labeled an “alphabet soup” by its critics. Most of these New Deal acts were passed within the first 100 days of Roosevelt’s Administration and were intended to provide Relief, Recovery, and Reform.

How many of these agencies can you identify?

How was the label ‘Alphabet Soup’ meant to criticize FDR’s New Deal?


Confused?  Why do you think FDR tried so many different programs?