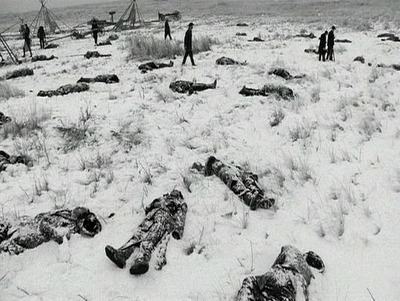 Whats the difference between a Battle and a Massacre?

Read the account of the Battle of Wounded Knee  and compare it to the first hand accounts of the Indians who were there. What differences do you notice? How are the accounts biased?

I find it hard to accept that Wounded Knee was a “battle” rather than a “massacre.” Chief Big Foot’s abject band of 300 was comprised mostly of women and children. The adult men among them were few and not well armed. All of them were starving and suffering from prolonged exposure to cold. Before embarking on their trek which tragically ended at Wounded Knee, they had spent more than a decade on the reservation, being systematically beaten down and broken apart.

Contrast this to the 500 well-fed, equipped, and armed soldiers sent to prevent Chief Big Foot’s (a.k.a. Spotted Elk) band from reaching Pine Ridge. This army unit infamously included the reconstituted 7th Cavalry, which had been humiliated at the Custer battle in 1876 and was itching for retribution. Consider the chilling orders issued to the army:


Disarm the Indians. Take every precaution to prevent their escape. If they choose to fight, destroy them.


Short, concise, and clear. The results were deadly, and it was not a battle. One can come to this conclusion only by relying primarily or exclusively on government and army sources. 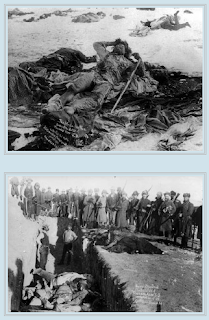 In the end, nearly 200 Lakota lay dead and 25 soldiers were killed. Most of the soldiers were killed by a few warriors defending the women, children, and elderly being slaughtered by 500 troopers using rifles and 4 Hotchkiss cannons with exploding shells (with a firing rate of 1 shell per second), this strains credulity. Unwisely, the army commander had formed his troops in a circle around the Lakota, so when the firing began the troopers were shooting not only at the unprotected Lakota, but also at their fellows — killing each other with “friendly” fire. This resulted in a court martial trial for the commander James William Forsyth. The charges against him were ultimately dropped and he was later promoted to Major General. (source)

Its been more than 120 years since this massacre. Has the Government made amends?

Listen and you decide: Bury My Heart At Wounded Knee (lyrics)
Posted by Mr. Kelly at 5:55 AM