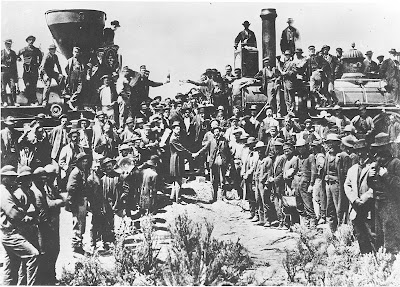 Can you spot the differences in these two pictures?

Completing the last link in the First Transcontinental Railroad with a spike of gold was the brainchild of David Hewes, a San Francisco financier and contractor. The spike had been manufactured earlier that year especially for the event by the William T. Garratt Foundry in San Francisco. Two of the sides were engraved with the names of the railroad officers and directors. A special tie of polished California laurel was chosen to complete the line where the spike would be driven. The ceremony was originally to be held on May 8, 1869 (the date actually engraved on the spike), but it was postponed two days because of bad weather and a labor dispute that delayed the arrival of the Union Pacific side of the rail line. On May 10, in anticipation of the ceremony, Union Pacific No. 119 and Central Pacific No. 60 (better known as the Jupiter) locomotives were drawn up face-to-face on Promontory Summit, separated only by the width of a single tie. The golden spike was made of 17.6-karat(73%) copper-alloyed gold, and weighed 14.03 ounces (436 g). It was dropped into a pre-drilled hole in the laurel ceremonial last tie, and gently tapped into place with a silver ceremonial spike maul.


Why was this Rail Road necessary for the United States?

How would it effect our nation's future?