Who Really Owns the Land?

What is your most valuable possession? How can you prove you 'own' it? 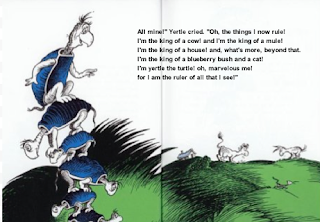 Listen to the song

According to John Locke, one doesn’t acquire land merely by claiming it, or even by living on it. One acquires solely through productive use. Moreover, one has no right to hold more land than one can use productively.

The Indians left much of the land unused, they never farmed it, raised livestock, or mined any of it. Land, a part of the universe, belonged to all, particularly the tribe. Individual land ownership did not exist, since all were entitled to the fruits of nature. Users' rights were protected and specified in various traditions, but there was no such things as land "ownership". Generally, individuals could clear as much land as needed for farming; this land would remain in a family's possession as long as they continued to use it. Once it was abandoned, anyone else could cultivate it.

1) What would Locke say to Yertle the Turtle?

2) What would he say to the Indians?

3) Did we really steal the Indian’s land?

4) Were the Indians using all of it?

5) How did Indians view of the land differ from the settlers?

7) How did the Dawes Act take advantage of the Indians?