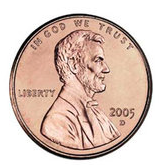 Penny Debate: Should the United States keep the penny or get rid of it?

The U.S. Cent, or penny coin, has almost no purchasing power today. The cost of making the pennies (1.26 cents each) is higher than face value, and the melt value of pennies ranges from more than 2.4 cents for the pre-1982 copper pennies, to nearly a full cent for the zinc pennies. However, the penny is a very sentimental coin to most Americans, and many people fear that eliminating the penny would raise prices because things would need to be rounded to the nickel.

Love them or Hate them pennies don't seem to be going away any time soon.

Read this article and then make a 'T' chart showing the pros & cons of the 1 cent coin.

Has the United States gotten rid of coins in the past?  What was a 'hay' cent?

Are foreign countries like China melting down our old pennies for the copper?

What coins are currently in circulation? Who is on them?  Why? Should we keep them?

Is there an Obama Coin?  How much is it worth?