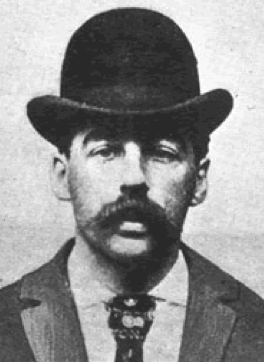 Sadly, there have been plenty of serial killers who have made names for themselves in America, from Jeffrey Dahmer to Charles Manson to Ted Bundy. But one of the earliest well-known American serial killers attained fame in his own horribly unique way.

In 1893, the World's Fair was held in Chicago, and a man named H.H. Holmes built a hotel in the suburb of Englewood to accommodate some of the many expected visitors. Unfortunately, the hapless guests were in for an unwelcome surprise, and many didn't come out alive. Holmes (born Herman Mudgett) already had a record as a fraud artist, and he was known for being cruel to children and animals. His hotel, which was later dubbed "The Murder Castle," was in fact the worst kind of fraud: a bizarre prison where guests were held captive, tortured and murdered [source: Taylor]. Some guests were gassed in their rooms, and others were burned with blow torches. Holmes slid their bodies down chutes to the basement where he had set up his own crematorium, as well as acid vats and lime pits. A blood-spattered surgical table, along with containers of poisons and bones, completed the evil array.

The murders were discovered when Holmes was arrested for insurance fraud and police searched the hotel. Holmes admitted to 28 counts of murder, but he was likely responsible for more deaths. He was hanged for his crimes in 1896, and the hotel was burned to the ground. Holmes has also been linked to many other crimes, including murders throughout the United States and Canada. Some believe he killed as many as 200 during his lifetime [source: A&E].

It is estimated that the United States accounts for 85% of the World's serial killers; more than the rest of the world combined! How do we explain this?

What do these killers have in common? Why are almost all of them men?

Where are you more at risk for serial killers: in the country or in the city?
Posted by Mr. Kelly at 2:00 PM