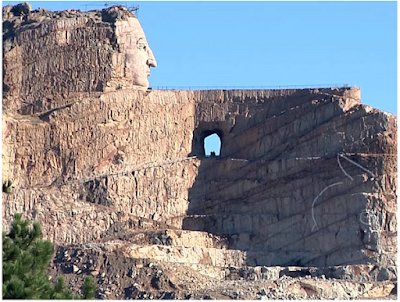 Its a somber day for America.

What do we remember about the events of 9/11?

Why do we create memorials? What is their purpose? How does that purpose influence their design?

A steel fragment from the destroyed World Trade Center in New York City is now part of a new monument at the Crazy Horse Memorial in South Dakota dedicated to the victims of the 9/11 terrorist attacks. The memorial also honors the efforts of emergency responders after the Sept. 11, 2001, attacks on the World Trade Center, the Pentagon and United Airlines Flight 93.

Native American leaders chose Crazy Horse for their own SD mountain carving because to them he was a great and patriotic hero. Crazy Horse's tenacity of purpose, his modest life, his unfailing courage, and his tragic death set him apart and above the others. He is a hero not only because of his skill in battle, but also because of his character and his loyalty to his people. Today, his values and his story serve as an inspiration for people of all races.


"My fellow chiefs and I would like the white man to know that the red man has great heroes, also." -- Henry Standing Bear, 1939

Do you suppose the families of the 7th Calvary felt that way? What would the reaction be if someone wanted to build a monument of Osama Bin Laden in NY City?   Could some people see Bin Laden as a hero? Who? Was Crazy Horse a terrorist?

Little Big Horn Battlefield in Montana memorializes the U.S. Army's 7th Cavalry and the Sioux and Cheyenne in one of the Indians last armed efforts to preserve their way of life. Here on June 25 and 26 of 1876, 263 soldiers, including Lt. Col. George A. Custer and attached personnel of the U.S. Army, died fighting several thousand Lakota, and Cheyenne warriors. Markers at Little Big Horn memorialize each of the fallen 7th Calvary where they fell.

An Indian Memorial wasn't dedicated until June 25th. 2003. It was placed in memory of all the tribes defending their way of life at the Battle.

Do you think someday a monument will be built honoring the terrorists behind the attacks?  Is this a fair comparison?

How have divisive events like 9/11 and Little Big Horn actually brought us closer together as a Country? Is this what the terrorists wanted? Why is it important for us to remember what really happened? What can the past teach us about the present? Can time heal all wounds?
Posted by Mr. Kelly at 12:00 AM