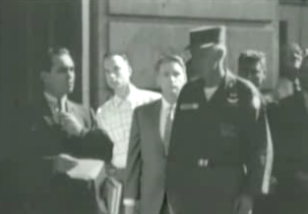 On May 17, 1954, the Supreme Court of the United States handed down its decision regarding the case called Brown v. Board of Education of Topeka, Kansas, in which the plaintiffs charged that the education of black children in separate public schools from their white counterparts was unconstitutional.

Brown v. Board of Education meant that the University of Alabama had to be desegregated. In the years following, hundreds of African-Americans applied for admission, but all were denied. The University worked with police to find any disqualifying qualities, or when this failed, intimidated the applicants. But in 1963, three African-Americans with perfect qualifications—Vivian Malone Jones, Dave McGlathery and James Hood—applied, refusing to be intimidated. In early June a federal judge ordered that they be admitted, and forbade Governor Wallace from interfering.