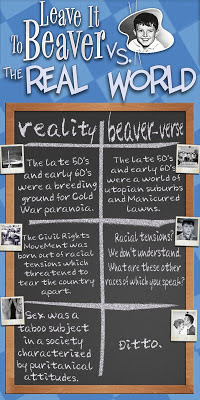 Leave It To Beaver is a show remembered by some as an example of a simpler time in America. A time before today's modern anything-goes mentality and it's culture of crassness. A time when traditional family values ruled the day. It is remembered by others as seemingly taking place in an alternate universe that bore no resemblance to reality evenwhen it was new.

I watched a lot of Leave it to Beaver in my childhood, as it was on every afternoon in re-runs, but it wasn’t until seeing it in adulthood that I appreciated to what extent the show does not merit its reputation as a phony part of a repressive Fifties monoculture. Yes, it depicts a world that probably never existed, and yes, like most of what was on television at the time, it under-represents diversity. There are no homosexuals (although who can be entirely sure about Mr. Rutherford?), few black people, and very limited controversy. Within its contained world, however, Leave it to Beaver promotes honesty and personal responsibility over the values of social status or self-interest. It also overturns (usually, anyway) the assumption that dishonesty is an accepted, and even expected, mode of behavior.