THS: Home of the Brave?!

The "Braves," an American Indian warrior, became the symbol of the Talawanda Schools in the 50s after a contest was held to name the newly consolidated district formed by Sommerville, Hanover, Milford, and Oxford.  Hannover 5th grader Karen Irwin won with the name 'Tallawanda' because Tallawanda Creek (aka 4 Mile Creek) flowed through the three newly merged townships.  After some discussion the second 'l' was dropped and the new High School on Chestnut Street opened in 1956 where it remained for then next half century.

But who was Talawanda?  What did the name mean? 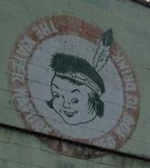 Where exactly is the old Talawnda spring & bottle company?

In 2018 the Talawanda school board voted 3-2 to change the high school’s mascot from “Braves” to “Brave” after a meeting lasting more than three hours.

A heated crowd filled the Performing Arts Center at Talawanda High School to listen to the recommendations made to the board by the superintendent-appointed branding committee.

The change responds to complaints that the name and logo currently used by Talawanda are offensive. Many feel that the logo is more of a “caricature,” depiction of what a Native American would look like, and others feel that they are simply honoring Native Americans with the “Braves” name.

Should we be proud to have the 'Brave' as our Mascot or change it to something else?

Is Talawanda alone in its use of Indian Mascots?

Do Indian Mascots honor or insult Native American Groups?
Posted by Mr. Kelly at 4:53 AM